Blog Editor: Solveig Hansen. I am a translator, web editor, e-mag editor, blogger and writer. I write in Norwegian, which is my mother tongue, and English. Homepage: TransOnline.no - translation, language and e-publishing services

I watched Genius (and wrote about it: An editor’s life: Cut. Cut. Cut?), about the relationship between writer Thomas Wolfe and his editor Maxwell Perkins, and find myself binge reading Thomas Wolfe plus A. Scott Berg’s Perkins biography plus Wolfe’s The Story of a Novel. The latter is mostly about the writing of Of Time and the River, which is the sequel to his first novel, Look Homeward, Angel. The process of writing and editing seen from different angles – a little geeky, I know, but it gives a broader perspective to the reading of the novels themselves.

The need to write, as if a calling, the constant observing, the doubt, the vulnerability to critique, but also larger-than-life egos, and harsh criticism of other writers and their work: The Perkins biography is a fascinating read and includes extracts from letters exchanged between Perkins and his writers – most notably Ernest Hemingway, F. Scott Fitzgerald, and Thomas Wolfe. It’s like traveling back in time and eavesdrop on conversations.

Why do writers become writers? How and when do they write? I find these questions intriguing and the answers to them more enlightening than many a writing class. Sure, we need to know the basics, such as dramatic structure, viewpoint, conflict, dialogs and so on, but in the act of writing, we’re on our own, trying to find our own voice.

In addition to the Perkins and Wolfe books, Charles Bukowski and Stephen King are on my list of “writers on writing.” These four books are inspirational and give an insight into the writer’s life and the craft of writing (they are not writing manuals):

Thomas Wolfe: The Story of a Novel (1936) – A 60+ page booklet about becoming a published author and the writing of the difficult second book, which was cut drastically by Perkins. Wolfe delivered a 5,000-page handwritten manuscript. About The Story of a Novel, he wrote: “I know it is too long a story; I know, also, that it must seem to be a story filled with the record of a man’s blunders and ludicrous mistakes, but simply because it is that kind of story, I hope it may have some value. It is a story of the artist as a man and as a worker.”

Charles Bukowski: On Writing (2015) – This book, edited by Abel Debritto, contains parts of Bukowski’s letters related to writing and spanning five decades, 1945 to 1993. In 1991, he wrote: “I’ll write to my last god damned breath, whether anybody thinks it’s good or not. The end as the beginning. I was meant to be like this. It’s as simple and profound as that.”

Stephen King: On Writing: A Memoir of the Craft (2000) – Prime rule: “Write a lot and read a lot.” King tells how newspaper editor John Gould taught him everything he, a high school student at the time, knows about writing in ten minutes, more than he had ever learned in the lit classes he attended. King was assigned to write sports reports for the newspaper. This is an example of Gould’s editorial corrections to the first report King wrote: 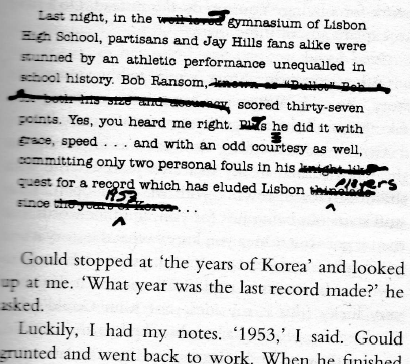 Away with inessential words, just say what you have to say. Lesson learned. And by the way: Contrary to what you might read on the Internet, the frequently quoted “Amateurs sit and wait for inspiration, the rest of us just get up and go to work,” attributed to Stephen King in On Writing, is not from this book. It was in fact painter Chuck Close who said it: “Inspiration is for amateurs. The rest of us just show up and get to work.”

When I wrote my first computer poem I was anxious that I would be suffocated by these layers of consumerist suffering. Would old Dostoevsky have ever used one of these babies? I wondered, and then I said – “Hell, yeah!”
– Charles Bukowski, “Bukowski on Bukowski: Bukowski in His Own Words”

2 thoughts on “Writers on writing”